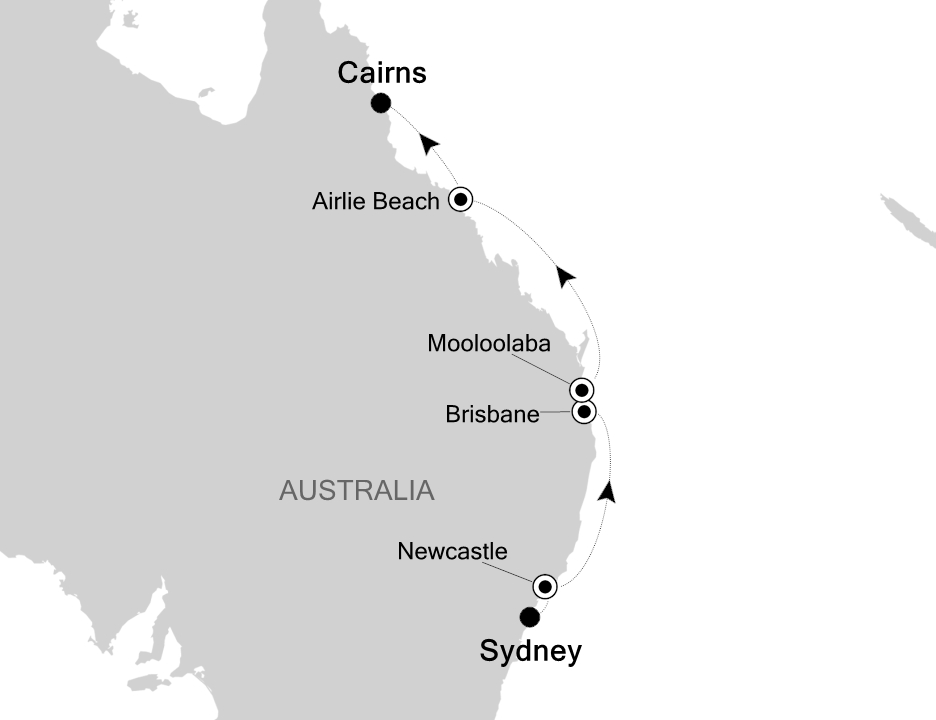 Sydney belongs to the exclusive club of cities that generate excitement. At the end of a marathon flight there's renewed vitality in the cabin as the plane circles the city, where thousands of yachts are suspended on the dark water and the sails of the Opera House glisten in the distance. Blessed with dazzling beaches and a sunny climate, Sydney is among the most beautiful cities on the planet.

With 4.6 million people, Sydney is the biggest and most cosmopolitan city in Australia. A wave of immigration from the 1950s has seen the Anglo-Irish immigrants who made up the city's original population joined by Italians, Greeks, Turks, Lebanese, Chinese, Vietnamese, Thais, and Indonesians. This intermingling has created a cultural vibrancy and energy—and a culinary repertoire—that was missing only a generation ago.

Sydneysiders embrace their harbor with a passion. Indented with numerous bays and beaches, Sydney Harbour is the presiding icon for the city, and urban Australia. Captain Arthur Phillip, commander of the 11-ship First Fleet, wrote in his diary when he first set eyes on the harbor on January 26, 1788: "We had the satisfaction of finding the finest harbor in the world."

Although a visit to Sydney is an essential part of an Australian experience, the city is no more representative of Australia than Los Angeles is of the United States. Sydney has joined the ranks of the great cities whose characters are essentially international. What Sydney offers is style, sophistication, and great looks—an exhilarating prelude to the continent at its back door.

Once known as the Steel City, today Newcastle is one of Australia’s hippest cities. It’s flanked by the Pacific Ocean and six beaches on its eastern side and a harbor on its west side. Gentrification began when the steel mills closed in 1999. Nowadays the old wharves and warehouses form part of the lively Honeysuckle precinct, which buzzes with hotels, cafés, and restaurants.

Founded in 1824 on the banks of the wide, meandering Brisbane River, the former penal colony of Brisbane was for many years regarded as just a big country town. Many beautiful timber Queenslander homes, built in the 1800s, still dot the riverbanks and inner suburbs, and in spring the city's numerous parks erupt in a riot of colorful jacaranda, poinciana, and bougainvillea blossoms. Today the Queensland capital is one of Australia's most up-and-coming cities: glittering high-rises mark its polished business center, slick fashion boutiques and restaurants abound, and numerous outdoor attractions beckon. In summer, temperatures here are broilingly hot and days are often humid, a reminder that this city is part of a subtropical region. Wear SPF 30-plus sunscreen and a broad-brimmed hat outdoors, even on overcast days.

Brisbane's inner suburbs, a 5- to 10-minute drive or 15- to 20-minute walk from the city center, have a mix of intriguing eateries and quiet accommodations. Fortitude Valley combines Chinatown with a cosmopolitan mix of clubs, cafés, and boutiques. Spring Hill has several high-quality hotels, and Paddington, New Farm, Petrie Terrace, West End, and Woolloongabba are full of an eclectic mix of restaurants and bars. Brisbane is also a convenient base for trips to the Sunshine and Gold coasts, the mountainous hinterlands, and the Moreton Bay islands.

Tourism is the lifeblood of Cairns (pronounced Caans). The city makes a good base for exploring the wild top half of Queensland, and tens of thousands of international travelers use it as a jumping-off point for activities such as scuba diving and snorkeling trips to the Barrier Reef, as well as boating, fishing, parasailing, scenic flights, and rain-forest treks.

It's a tough environment, with intense heat and fierce wildlife. Along with wallabies and grey kangaroos in the savannah and tree kangaroos in the rain forest, you'll find stealthy saltwater crocodiles, venomous snakes, and jellyfish so deadly they put the region’s stunning beaches off- limits to swimmers for nearly half the year. Yet despite this formidable setting, Cairns and tropical North Queensland are far from intimidating places. The people are warm and friendly, the sights spectacular, and—at the right time of year—the beachside lounging is world-class.