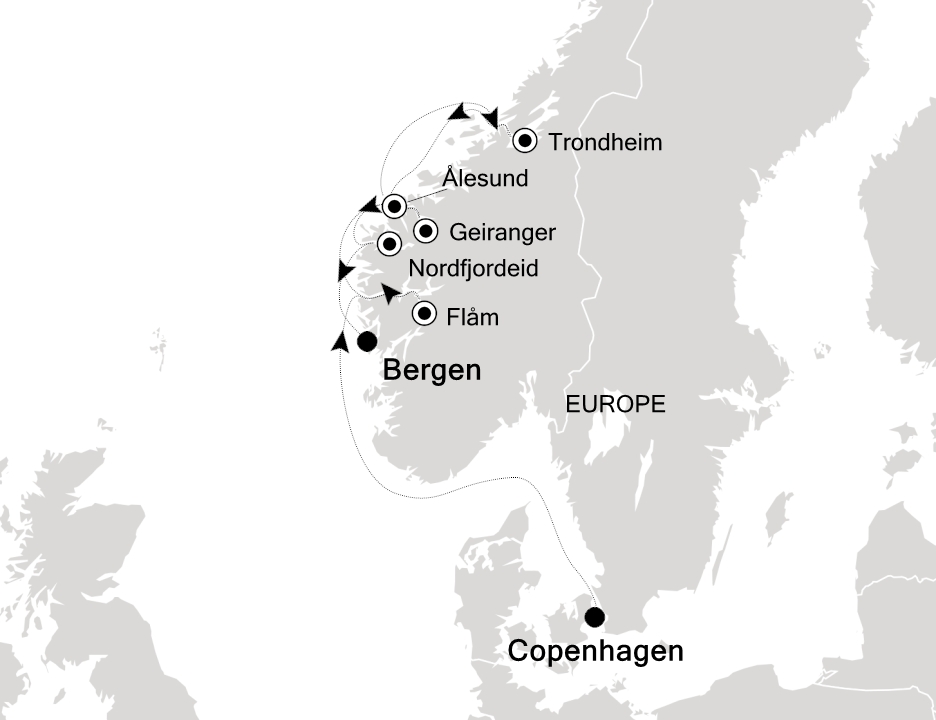 The Kingdom of Denmark is the geographical link between Scandinavia and Europe. Half-timber villages and tidy farms rub shoulders with towns and a few cities, where pedestrians set the pace, not traffic. In the capital, Copenhagen—København in Danish—mothers safely park baby carriages outside bakeries while outdoor cafés fill with cappuccino-sippers, and good looking Danes pedal to work in lanes thick with bicycle traffic. The town was a fishing colony until 1157, when Valdemar the Great gave it to Bishop Absalon, who built a castle on the site of what is now the parliament, Christiansborg. It grew as a center on the Baltic trade route and became known as købmændenes havn (merchants' harbor) and eventually København.

In the 15th century it became the royal residence and the capital of Norway and Sweden. From 1596 to 1648 Christian IV, a Renaissance king obsessed with fine architecture, began a building boom that crowned the city with towers and castles, many of which still stand. They're almost all that remain of the city's 800-year history; much of Copenhagen was destroyed by two major fires in the 18th century and by British bombing during the Napoleonic Wars.

Today’s Copenhagen has no glittering skylines and little of the high-stress bustle of most capitals. The morning air in the pedestrian streets of the city's core is redolent of baked bread and soap-scrubbed storefronts. If there's such a thing as a cozy city, this is it.

One of the most scenic train routes in Europe zooms high into the mountains between the towns of Myrdal and Flåm. After the day-trippers have departed, it's a wonderful place to extend your tour and spend the night.

The coastal town of Ålesund is the commercial capital of the Møre og Romsdal district. But more important, it is noted for its characteristic Jugendstil (Art Nouveau) buildings, which some claim make Ålesund one of the most beautiful towns in Norway. This Art Nouveau style emerged when the town was completely rebuilt after a devastating fire in 1904 destroyed nearly 800 buildings and left 10,000 residents homeless. It is said that the fire started by a tipped oil lamp. Rebuilding was carried out with the help of many young, foreign architects who added their own flourishes to the architectural blend of German Jugendstil and Viking roots. Today, narrow streets are crammed with buildings topped with turrets, spires and gables that bear decorations of dragonheads and curlicues. As one of the few remaining Art Nouveau towns in the world, in 1998 Ålesund was awarded the coveted Houens National Memorial Prize for the preservation of its unique architecture.

One of Scandinavia's oldest cities, Trondheim was the first capital of Norway, from AD 997 to 1380. Founded in 997 by Viking king Olav Tryggvason, it was first named Nidaros (still the name of the cathedral), a composite word referring to the city's location at the mouth of the Nidelva River. Today, it's Central Norway's largest (and Norway's third largest) city, with a population of 150,000. The wide streets of the historic city center remain lined with brightly painted wood houses and striking warehouses. But it's no historic relic: it's also the home to NTNU (Norwegian University of Science and Technology) and is Norway's technological capital.

The Geirangerfjord, which made the UNESCO World Heritage List in 2005, is Norway's most spectacular and perhaps best-known fjord. The 16-km-long (10-mile-long), 960-foot-deep Geirangerfjord's most stunning attractions are its roaring waterfalls—the Seven Sisters, the Bridal Veil, and the Suitor. Perched on mountain ledges along the fjord, deserted farms at Skageflå and Knivsflå are being restored and maintained by local enthusiasts.

The village of Geiranger, at the end of the fjord, is home to fewer than 300 year-round residents, but in spring and summer its population swells to 5,000 due to visitors traveling from Hellesylt to the east. In winter, snow on the mountain roads often makes the village isolated.

Many visitors fall in love with Bergen, Norway's second-largest city, at first sight. Seven rounded lush mountains, pastel wood houses, the historic wharf, winding cobblestone streets, and Hanseatic relics all make it a place of enchantment. Its many epithets include "Trebyen" (Wooden City), "Regnbyen" (Rainy City, due to its 240 days of rain a year), and "Fjordbyen" (gateway to the fjords). Surrounded by forested mountains and fjords, it's only natural that most Bergensers feel at home either on the mountains (skiing, hiking, walking, or at their cabins) or at sea (fishing and boating). As for the rainy weather, most visitors quickly learn the necessity of rain jackets and umbrellas.

This harbor city has played a vital role in the Norwegian economy. Before the discovery of North Sea oil and Bergen's subsequent role in the development of Norway's oil industry, the city was long a major center of fishing and shipping. In fact, Bergen was founded in 1070 by Olav Kyrre as a commercial center. In the 14th century, Hanseatic merchants settled in Bergen and made it one of their four major overseas trading centers. The surviving Hanseatic wooden buildings on Bryggen (the quay, or wharf) are topped with triangular cookie-cutter roofs and painted in red, blue, yellow, and green. Monuments in themselves (they are on the UNESCO World Heritage List), the buildings tempt travelers and locals to the shops, restaurants, and museums inside. At night, when Bryggen is lit up, these modest buildings, together with the stocky Rosenkrantz Tower, Mount Fløyen, and the yachts lining the pier, are reflected in the waters of the harbor—making one of the loveliest cityscapes in northern Europe.

FROM US$ 18,600
with early booking bonus
REQUEST A QUOTE

FROM US$ 17,600
with early booking bonus
REQUEST A QUOTE

FROM US$ 16,500
with early booking bonus
REQUEST A QUOTE

FROM US$ 13,900
with early booking bonus
REQUEST A QUOTE

FROM US$ 12,900
with early booking bonus
REQUEST A QUOTE

FROM US$ 11,900
with early booking bonus
REQUEST A QUOTE

FROM US$ 10,200
with early booking bonus
REQUEST A QUOTE

FROM US$ 7,100
with early booking bonus
REQUEST A QUOTE

FROM US$ 6,800
with early booking bonus
REQUEST A QUOTE

FROM US$ 6,500
with early booking bonus
REQUEST A QUOTE

FROM US$ 6,000
with early booking bonus
REQUEST A QUOTE

FROM US$ 5,500
with early booking bonus
REQUEST A QUOTE